Renewal of MOC on Climate Change between Japan and California State 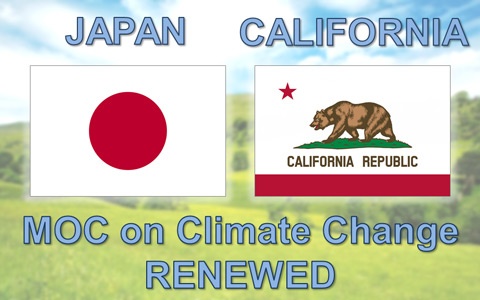 On 7th September 2016, the Government of Japan and the State of California concurred to renew the “Memorandum of Cooperation on Climate Change, Renewable Energy, Trade and Investment, Vehicles, High Speed Rail, and Water” (MOC), which was originally signed by both sides in 2014. Since then, both sides have collaborated on projects through the MOC to work toward addressing issues such as global climate change.

Shortly after the original MOC was signed, the New Energy and Industrial Technology Development Organization (NEDO) and the State of California Governor’s Office of Business and Economic Development (GO-Biz) signed a Letter of Intent (LOI) to conduct a feasibility study for an Electric Vehicle (EV) demonstration project in California. A year later, both organizations also signed a Memorandum of Understanding (MOU) on smart community demonstration projects.

With the end of the MOC’s effective term approaching, the Government of Japan and the State of California decided to renew the MOC in order to reaffirm its commitment to address issues such as climate change and to enhance cooperation on these pressing issues.